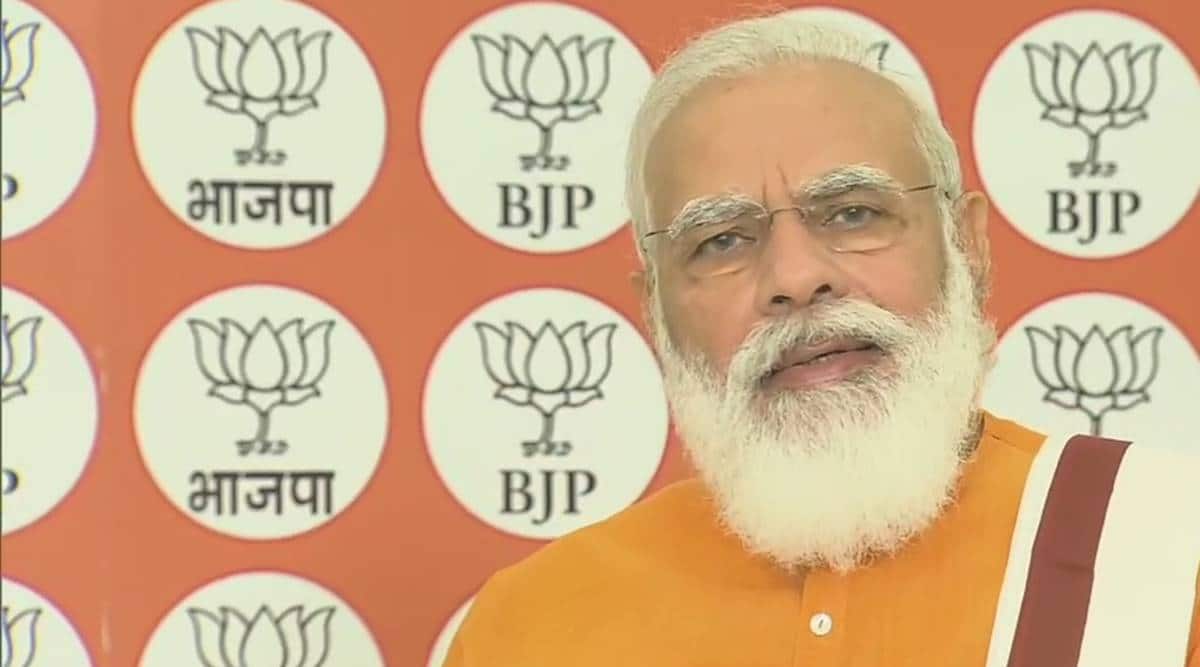 Amid the nationwide protests by farmers against the three contentious farm Bills passed by Parliament earlier this week, Prime Minister Narendra Modi Friday reiterated that the BJP-led NDA government has created a history by increasing the Minimum Support Price (MSP) for farmers and accused the Congress of giving “hollow slogans in favour of farmers”.

Addressing party workers on the birth anniversary of Pandit Deen Dayal Upadhyaya, he said, “Hollow slogans were given in favour of farmers, labourers for many decades since Independence. Governments were formed in the name of farmers, workers but all they got was jumbled web of promises, laws, which farmers or labourers could never understand. But our government has constantly tried to change this situation and has introduced reforms for the welfare of farmers.”

“In the last few years, NDA govt made full efforts to connect farmers with banks. Over Rs 1 lakh crores transferred to over 10 crore farmers under PM Kisan Samman Nidhi Yojana. Our effort was to provide KISAN credit cards to more & more farmers so they can avail loans easily,” he added. The Prime Minister also said that those who always lied to farmers are shooting from their shoulders and they are misleading farmers.

PM Modi also asked the party workers to take the message of agriculture reforms and its benefits to farmers and said that BJP workers’ conduct should be in line with expectations, aspirations of India of 21st century. “All BJP Karyakartas should reach out to farmers on the ground and inform them in a very simplified language about the importance and intricacies of the new farm reforms, how these will empower them. Our ground connect will bust the lies and rumours being spread in the virtual world,” he said.

Explaining on the labour laws, PM Modi said, “New labour laws will ensure timely salary for over 50 crore organised and unorganised workers. Only 30 per cent of workers so far had coverage of minimum wage guarantee. It will now expand to all workers in the unorganised sector. Earlier, there existed about 10,000 slabs of minimum wages for various sectors. Under new labour reforms, these have been reduced to around 200 slabs.”

Praising Upadhyaya, he said, “The contribution of Pandit Deen Dayal Upadhyaya ji to make India better as a country and society has inspired generations. The path he has shown to every BJP worker instils confidence in us.”

Meanwhile, the Bharatiya Kisan Union and several other organizations are holding a nationwide demonstration and “chakkajam” against the three contentious bills. Police personnel in adequate strength were deployed across Punjab and Haryana to ensure law and order. As many as 31 farmer organisations joined the call for a complete shutdown in Punjab. Some farmers gathered across several locations to disrupt vehicular movement while the others held protest marches. On Thursday, farmer unions began a three-day ‘rail roko’ protest at six different locations in the state with 1,000 to 1,500 farmers sitting on the tracks at each protest site.