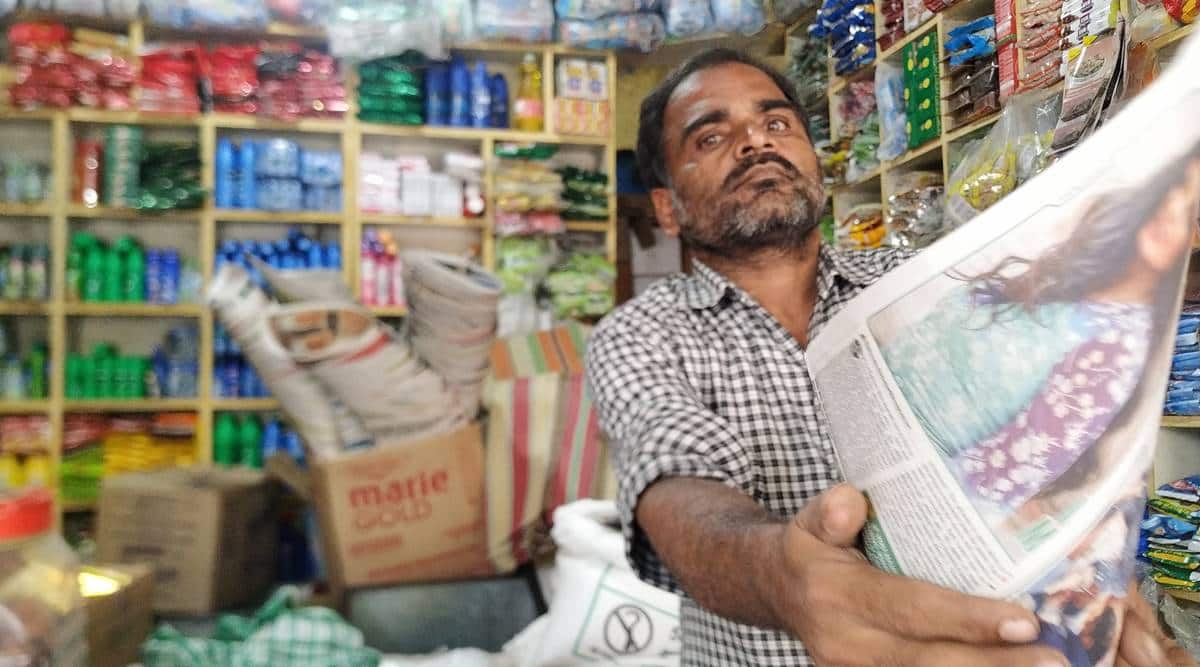 Newspaper raddi is widely used as a convenient and cheap packaging material by grocers and snack-sellers.

With the initial months of lockdown disrupting the print and circulation of newspapers, vendors and local scrap dealers, whose livelihood depended on collecting and reusing old newspapers, are facing a difficult time.

Printing presses came to a standstill during the initial lockdown period of March-May. The halt in the subsequent circulation of papers have since affected several–from grocers, fruit vendors and snack sellers who reuse the papers for packaging purposes to local scrap dealers who collect old newspapers from households to sell them to bigger deals or recycling centres.

The shortage in the supply of newspapers has forced users such as grocers and fruit vendors to buy newspaper raddi for anywhere between Rs 20 to 35 a kilo from dealers (usually priced at Rs 12 to 15, depending on quality). The scrap buyers are in turn ready to cough up Rs 15-20 per kg and are less likely to harangue the household seller for a cheaper acquisition.

Scrap dealers say that the stocks of the both kind have dried down and they are not able to meet the demand.

“For several weeks in March-April, newspaper printing was shut, so naturally no newspaper scrap came into the market. Even now schools, colleges, public libraries, and most of the offices are not functional. These are places that we get newspaper raddi from. Also, door-to-door scrap collectors are not able to move freely in housing societies, bringing down the receipts of scrap paper considerably,” said Navin Thakkar, a dealer in Pune.

As per Anurag Asati, co-founder of The Kabadiwala, a Bhopal based firm that provides doorstep junk collection service, the major reason for shortage of newspaper raddi in the market that the pandemic has stopped international waste paper coming into India.

Once a newspaper starts circulating as scrap, it acquires a life of its own. The peculiar logic of printed information unintentionally passed from one hand to another is manipulated in cinema where it often becomes a device to deliver a plot twist. In Gadar-Ek Prem Katha (2001), Sakina accidentally comes across a scrap paper informing her of her father’s wellbeing across the border in Pakistan.

As per the Audit Bureau of Circulation (ABC) and Registrar of Newspapers for India, every day 70 million copies are printed and sold by 17,573 registered daily and weekly newspapers in India. Of these, 34 million copies are sold by top 20 newspapers – a club dominated by Hindi, Bengali, Marathi and English language dailies.

To print these, the presses consume about 17.1 million metric tonnes (data for 2017-18) of standard newsprint per annum, part of which is imported from abroad. As per a discussion paper published on the Department of Industry and Internal Trade website, about 13 million metric tonne newspaper and magazine scrap enters the market every year with an estimated market value of Rs 13,000 crore. A part of this is acquired by domestic manufacturer of newsprints who complete the circle by supplying it for fresh publication. Other uses such as by grocers, snacks sellers and farmers (who use it to wrap fruits with to hasten ripening) leads to the paper becoming domestic trash which may end up in landfills with other degradable waste. In the interiors, the prices of raddi have seen a much steeper rise. This, locals traders say, is due to higher reliance on paper for packaging as compared to cities where plastic bags – which is comparatively expensive – are used. With plastic bag supply chains getting disturbed owing to the lockdown as well as bans on the use of certain kinds of plastic, the use of newspaper raddi has gone up recently in larger cities as well.

“Generally I sell Marathi raddi for Rs 20 and English for Rs 25 a kilo,” said Munna Ambure, a newspaper vendor in Parbhani. “My scrap fetches a better price than household raddi because mine is unread paper which is cleaner. Now the price has gone up to Rs 30/kg for Marathi and Rs 35/kg for English papers. But since lockdown, I have reduced my daily newspaper orders considerably as many people have unsubscribed owing to the fear of pandemic. I am not left with much of the scrap to sale,” he said.

Wholesaler Thakkar feels that the supply of scrap paper will go up when schools, libraries will open and fear among the readers for Covid-19 subsides.

“With the government deciding to let the schools open by November, we are hoping that the by December things will normalise and the business will stabilise a bit,” said Thakkar.

As per Asati, with recycling industries spending more to buy raw material from domestic scrap market – than cheaply imported paper waste – the prices of recycled paper will go up thereby increasing the prices of books, notebooks and diaries in the short run.

“It’s affecting the packaging industry now. When schools open, you will find that the prices of books and notebooks will be higher than usual,” said Asati.