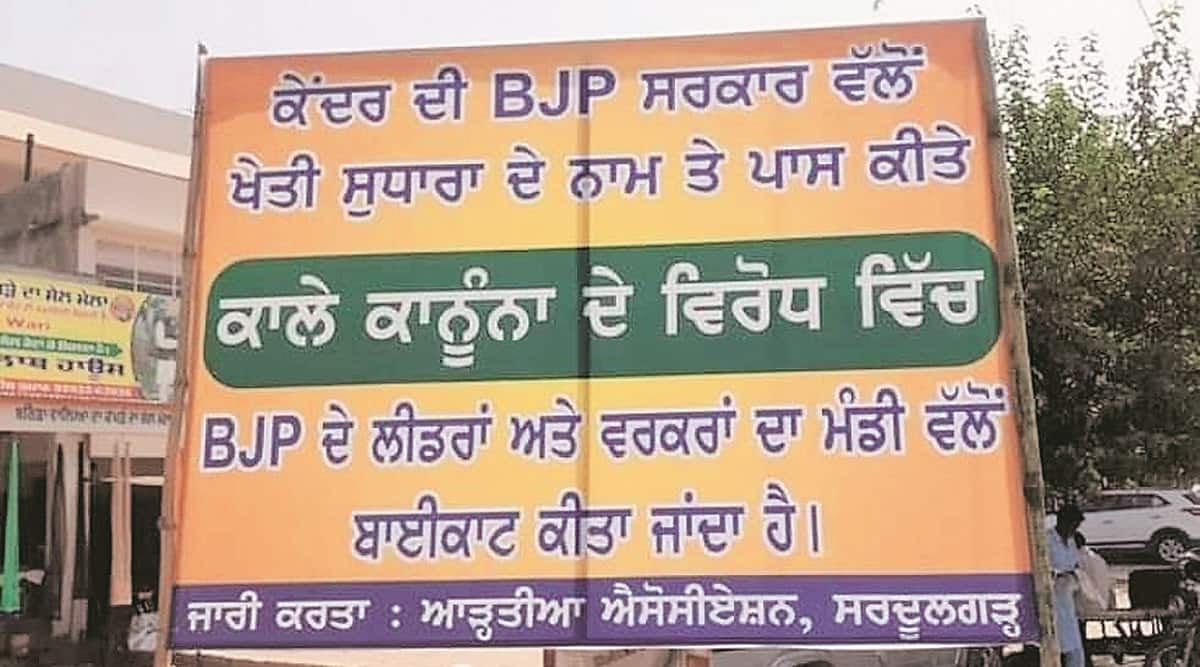 A board announcing boycott of BJP in Sardulgarh mandi of Mansa district on Tuesday. (Express Photo)

Farmers unions in Punjab on Tuesday stepped up their campaign against the BJP in the state with declaring that they will not allow party leaders to enter villages to bat for Centre’s farm Bills.

In fact when BJP’s Barnala district unit tried doing a press conference on the benefits of farm Bills, party leaders were gheraoed at the Barnala Guest House by members of BKU (Lakhowal) who raised slogans against PM Narendra Modi, and the central government.

Jagseer Singh Chhiniwal, president of BKU (Lakhowal)’s Barnala unit, said,”We will not allow them to enter villages and will protest against them wherever they go. They should sit with us, but on the contrary, they are misguiding us. We have decided to boycott them across the state.”

He added: “BJP leaders or workers are not welcome in any village of Punjab. They will face our wrath if they come, our over 31 farmer unions have decided to boycott BJP at state level.” said Chhiniwal.

The voices of BJP’s boycott echoed in other parts of the state too. In Sangrur, Kirti Kisan Union protested outside one Aggarwal Dharamshala in Sangrur district where BJP’s district unit was addressing mediapersons over farm Bills.

Union members disrupted the press conference by raising slogans against BJP leaders due to which BJP leaders left the venue midway. Kisan union members used a loudspeaker to raise slogans: ‘Desh de gaddar murdabad’, ‘BJP sarkar murdabad’, ‘Kisana de virodhi murdabaad’. Not only this, one farmer leader Bhupinder Singh Longowal said, “We appeal to Aggarwal Dharamshala’s management that they should not give this venue to BJP ever and rather no one should give them any place on rent. We should completely boycott them and we will protest against them wherever their leaders will go. It is a complete boycott of all BJP leaders and their workers.”

In Mansa too, farmer unions have announced a boycott of BJP workers, adding that they are even making list of party workers and their names will be announced to urge people against buying anything from them.

We do not fear protests: BJP

BJP, meanwhile, is planning a statewide campaign of reaching out to the rural belt, irrespective of the protests. BJP’s Punjab spokesperson Anil Sareen said, “They are our own brothers and sisters. We will get them to listen to us.”

BJP’s state unit stated that they will be reaching out to masses in rural as well as urban areas to tell them their view point. Randeep Singh Deol, district president of Sangrur BJP, said, “As farmers have the right to protest, we too have the right to tell our viewpoint. In a democratic country, everyone can say his/her opinion. Hence, we will continue meeting people and will tell them about the benefits of farm Bills as how these amendments can benefit the farmers. On Tuesday, we wanted to reach out to masses through the media, but now we have decided to reach till village level. We are yet to decide whether to write them letters, or to educate them through social media before meeting them personally.”

Deol alleged,”We have a apprehension that the state government leaked out information of the press conference to Kisan unions…but we do not fear any protests.”

Meanwhile, even SAD is organising separate meetings at district level in which workers are being told to protest against the farm Bills and SAD’s local leaders are explaining to their workers that bills are anti-farmer and they fully support farmers on this issue. SAD’s Muktsar MLA Kanwarjit Singh Rozy Barkandi did a meeting with party workers Tuesday at Bhai Maha Singh Hall, while Muktsar’s district president Raja Phutela did a separate meeting with BJP workers in the city area.