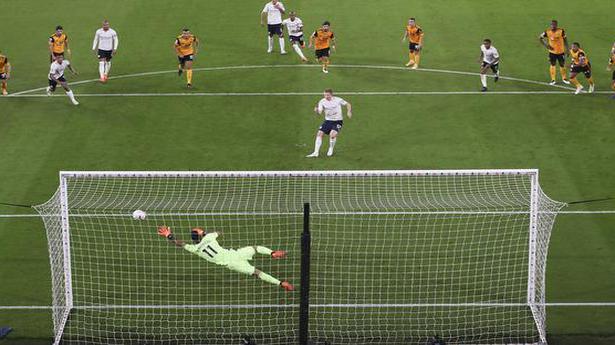 Manchester City got its Premier League campaign off to a flying start with a 3-1 win at Wolverhampton Wanderers on Monday.

Wolves beat City home and away last season but Pep Guardiola’s side were full value for its victory despite a strong response from the home side after they went 2-0 down.

PFA Player of the Year Kevin De Bruyne put City in front with a penalty in the 20th minute after he broke into the box and was brought down by Romain Saiss.

City’s trademark passing game was at its very best for its second goal just past the half-hour, Phil Foden ending a fine move with a clinical finish from a low Raheem Sterling cross.

Wolves goalkeeper Rui Patricio did well to keep out a De Bruyne effort as City threatened to put the game beyond them before the break but it was a different story after the interval.

The home side gained some reward in the 78th minute when Jimenez headed home a Podence cross, but in stoppage time Gabriel Jesus made sure of the win for the visitors with a shot which deflected off Conor Coady.

Aston Villa got its season up and running with a laboured 1-0 home win against 10-man Sheffield United with Ezri Konsa’s second-half header proving enough to settle a dour game.

In Serie A, AC Milan’s veteran forward Zlatan Ibrahimovic scored twice, but also missed an open goal, to give his side a 2-0 win over Bologna and the season’s campaign off to a good start.