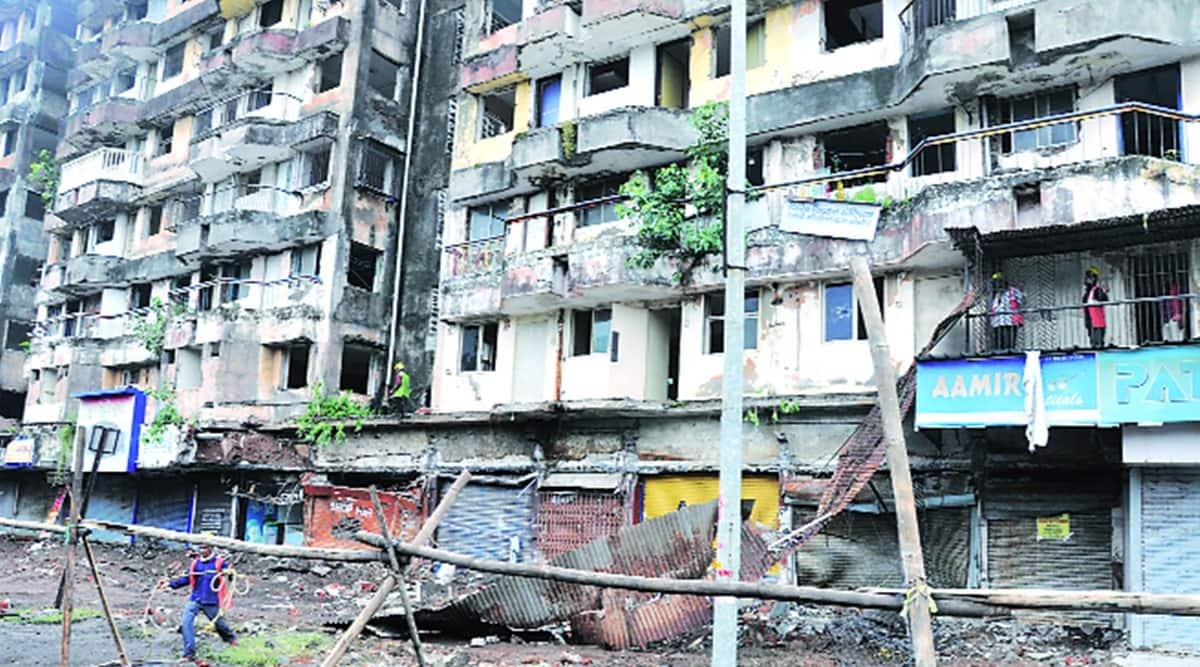 Balconies of flats that collapsed in Rander, Surat. (Photo by Hanif Malek)

Three labourers died on Tuesday after balconies of two flats collapsed in Rander zone in Surat. The apartment was empty as the Surat Municipal Corporation had earlier asked all the flat holders to vacate the building, due to its “poor construction quality”.

As per the fire department sources, a few labourers slept on the ground floor of Nilanjana apartment near some shops where they took shelter due to heavy rainfall and winds.

The incident happened at 4.40 am, when the balconies of two flats of the apartment collapsed. After hearing the loud noise, several other labourers and local residents reached the spot and found the labourers trapped inside debris. They informed the fire department and Rander police.

After talking to other labourers who survived, the officials identified three deceased labourers as Anil Chandra Nepali (35), Jagdish Chauhan (45) and Rajubhai Marwadi (40). Attempts were being made to contact their family members. The bodies had been kept in morgue in the New Civil hospital. Rander police had lodged a case of accidental death and started probe.

SMC Rander Zone head C Y Bhatt said, “Due to its poor construction quality, we emptied the Nilanjana apartment in October 2019 and had told flat holders to demolish or repair the apartment. But till date no repairing work or demolition was done. There are 25 shops on the ground floor and around 48 flats on the upper floors of the apartment. The shops were also sealed by us. “

“Due to heavy rainfall and lightning, the labourers might have taken shelter in the nearby shops and slept there. We will start a drive to identify apartments with poor construction quality in our zone and ensure that repairing work is done or entire building is demolished,” Bhatt added.

Rander Police Inspector D V Baldaniya said, “We have registered a case of accidental death and started investigation. The residential apartment was empty as all the flat holders had shifted to other places. The building was likely to be repaired or demolished but no steps were taken. We will look into all the aspects and strict actions will be taken against those responsible.”