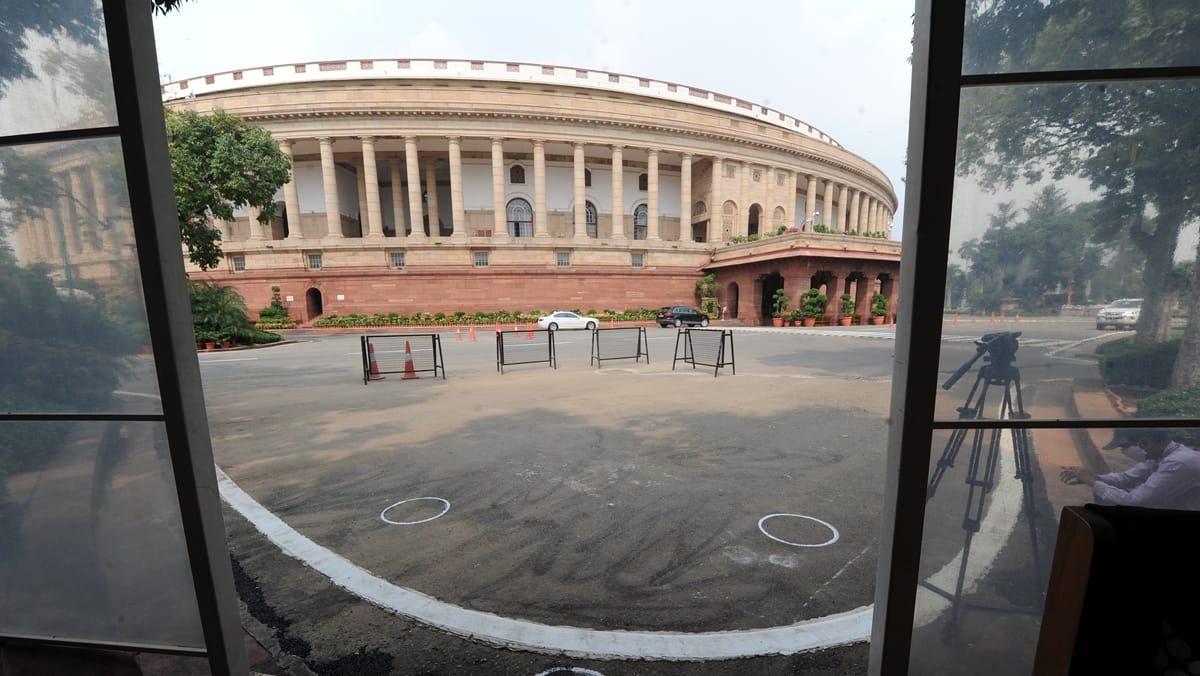 Markings to maintain physical distancing are seen on the ground outside Parliament building in New Delhi. (AP)

Parliament on Tuesday passed a bill to remove cereals, pulses, oilseeds, edible oils, onion and potatoes from the list of essential commodities.

The Essential Commodities (Amendment) Bill, which was approved by the lower house on September 15, was approved by a voice vote in Rajya Sabha. The bill replaces an ordinance promulgated in June.

The bill is also aimed at removing fears of private investors of excessive regulatory interference in their business operations.

The freedom to produce, hold, move, distribute and supply will lead to harnessing of economies of scale and attract private sector/foreign direct investment into agriculture sector, the government had said earlier.

Replying to a short debate, Minister of State for Consumer Affairs, Food and Public Distribution Danve Raosaheb Dadarao said the stock limit conditions imposed through the law were hindering investment in the agriculture infrastructure.

The amendments to the six-and-half-decade law provides that stock holding limit on commodities will only be imposed under exceptional circumstances like national calamities, famine with a surge in prices, the minister said.

Also, processors and value chain participants are exempted from the stock limit.

The minster said the move will boost investment in agriculture sector and will also create more storage capacities to reduce post harvest loss of crops.

“This amendment is in favour of both farmers and consumers,” Dadarao added.

According to him, the changes in the 1955 law is an important step by the government to achieve its target of doubling farmers’ income and also for ease of doing business.

He said the essential commodities act was brought when the country was not a self sufficient in food grains production. But now the situation has changed, therefore the amendment was required, he said.

While India has become surplus in most agri-commodities, farmers have been unable to get better prices due to lack of investment in cold storage, warehouses, processing and export.

Farmers suffer huge losses when there are bumper harvests, especially of perishable commodities, he said.

Earlier in the day, many opposition members had staged a walkout from the House demanding that the suspension of eight members be revoked.