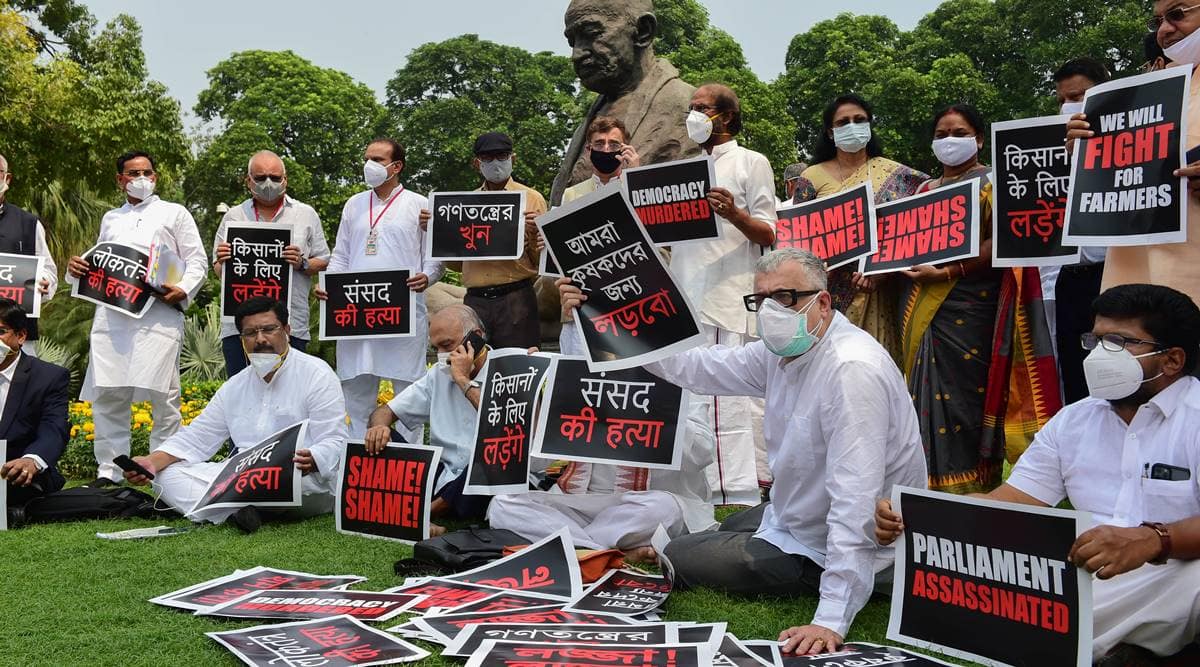 Parliament Monsoon Session Live Updates: Rajya Sabha Deputy Chairman Harivansh on Tuesday brought tea for the eight opposition MPs who staged an overnight protest next to the Gandhi statue in Parliament premises over their suspension due to “unruly behaviour”. The MPs, who have been suspended for the rest of the monsoon session, had spread out sheets next to the statue and were seen holding placards that read – “We will fight for farmers” and “Parliament assassinated”. Opposition MPs, from both Lok Sabha and Rajya Sabha, dropped in at the protest site in a show of support and solidarity.

At least 18 parties have written to President Ram Nath Kovind urging him not to give his assent to the farm Bills. They have also sought an audience with him. In a detailed memorandum, they have recounted the events that unfolded in Rajya Sabha Sunday and the reason for moving a no-confidence resolution against the Deputy Chairman. The Lok Sabha on Monday passed bills amending the Insolvency and Bankruptcy Code and the Foreign Contribution (Regulation) Act even as Rajya Sabha saw stormy scenes after eight Opposition MLAs were suspended for the rest of the monsoon session over their “unruly” conduct in the Upper House when the contentious farm bills were passed.

Even as protests raged on in Haryana, Punjab and other states over the farm bills, the government hiked the minimum price for buying wheat and five other rabi crops by up to six per cent — sending a strong message to farmers across the country on continuation of minimum support price (MSP)-based procurement system.

Farmer groups are also protesting the two bills — The Farmers’ Produce Trade and Commerce (Promotion and Facilitation) Bill, 2020 and The Farmers (Empowerment and Protection) Agreement of Price Assurance and Farm Services Bill, 2020, which have been passed by Parliament.