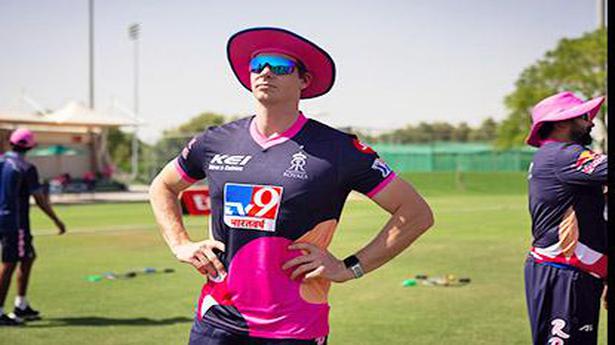 Steve Smith looks quite likely to play on Tuesday.

The Australian run-machine, who had to sit out the ODI series against England earlier this month after being hit in the head during a nets session, expressed hope that he would be able to take the field for Rajasthan Royals’ opening IPL fixture, against Chennai Super Kings at Sharjah.

“(I have) been in Dubai for a couple of days now with some good rest and then got into a bit of running,” said Smith. “Yesterday I did a bit of zig-zag running, which is part of the protocols to pass to get back to play. I’ll have a hit in the nets. (I hope to) be good to play (on Tuesday).”

The Royals captain said it felt good to catch up with his teammates — old and new. “The guys have been here for a month now and from all reports, the training has been magnificent. We have got a really good squad this year, really strong and we’re ready to get going,” he said.

He said Chennai Super Kings and Mumbai Indians have been two really strong teams for a long time. “We obviously watched a bit of the game the other night. Super Kings played really well to get over the line in the end.

“Hopefully we can put on a really good show and get our campaign off to a good start,” Smith said.

“It’s obviously great to have your skipper available for the first game… we are in really good hands,” he said.

“We couldn’t be happier with the preparation. We’ve got what we needed, having been here nice and early to get our preparation going on the back of the long lay-off,” said McDonald.