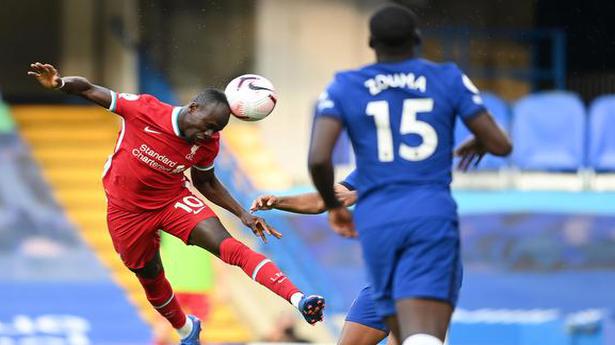 Juergen Klopp could barely contain the smile when asked after his side’s win at Chelsea whether it had been a good week for the Premier League champions.

Two goals from Sadio Mane just after halftime eased champions Liverpool to a 2-0 win over 10-man Chelsea in the Premier League season’s first heavyweight clash at Stamford Bridge on Sunday.

A dull game never threatened to live up to the eight-goal thriller when the side’s met in July, and it proved all-too-easy for Liverpool to lay down the season’s first big marker although Chelsea were architects of their own downfall.

Chelsea managed only one goal attempt in the first half but were solid enough until Danish defender Andreas Christensen was sent off shortly before the interval for hauling down Mane.

Mane headed Liverpool in front five minutes after the interval and four minutes later took advantage of a dreadful error by Chelsea keeper Kepa Arrizabalaga as the hosts crumbled.

Liverpool gave new midfield signing Thiago Alcantara a debut off the bench but the Spaniard’s first impact was to offer Chelsea a lifeline by fouling Timo Werner to concede a penalty with a little under 20 minutes remaining.

But Jorginho’s effort was saved by the otherwise redundant Alisson Becker to spare Liverpool any late tension.

A good week’s work for Klopp

Liverpool manager Juergen Klopp could barely contain the smile when asked after his side’s win at Chelsea whether it had been a good week for the Premier League champions.

The answer was pretty obvious. Two wins from their opening two Premier League games and, more significantly, they ended the week with an even stronger squad than they boasted last weekend.

But what will concern Liverpool’s title rivals will be the sight of Thiago Alcantara, signed for 20 million pounds ($26 million) from Bayern Munich on Friday, coming off the bench at halftime to slot seamlessly into Liverpool’s midfield machine.

The Spaniard did concede a penalty, thankfully for him saved by Liverpool keeper Alisson Becker, but looked every bit the class act that made him a such a favourite at Bayern.

“He needs to get used to his team mates, but when they went one man down it became the perfect game for him,” Klopp said.

“I liked his game a lot. Defensively it was tricky for him, but offensively, with the ball, that’s him, he wants to pass the ball. Everything he did today was completely natural.”

Factor in the signing of Portuguese forward Diogo Jota, recruited from Wolverhampton Wanderers on Saturday and who did not feature on Sunday, and no wonder Klopp looked happy.

His side were given a scare in a 4-3 win over Leeds United last week, but they put down a big marker at Stamford Bridge that they will take some toppling from their perch.

“Last week I was very happy, this week I am very happy but for different reasons, maybe. I liked both games. Look, we win 2-0, could have scored more,” Klopp said.

While Liverpool have new options to look forward to in midfield and attack, it was the usual names who proved too much for Chelsea on Sunday.

The only time Klopp looked irritated all day was when scolding his substitutes and assistants for celebrating the sending off of Christensen, while there was also the slight worry of a thigh injury for captain Jordan Henderson that forced him off to be replaced by Thiago.

“After the red card, the second half is a different game. Clean sheet, Ali saves a penalty, Thiago debut. If Hendo has absolutely nothing (no injury), it’s the perfect day.”