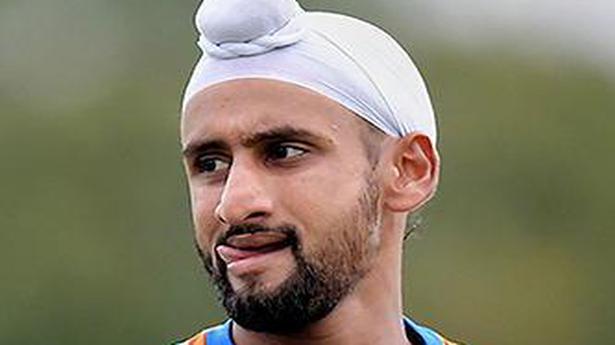 Mandeep is one of the six men hockey players, including skipper Manpreet Singh, who had tested positive for COVID-19 at the team’s training base here last month after they arrived for the national camp.

Being a professional athlete, Indian men’s hockey team striker Mandeep Singh has been through many tough situations during his career, but by his own admission the time spent while recovering from COVID-19 has been the most “stressful” one.

Mandeep is one of the six men hockey players, including skipper Manpreet Singh, who had tested positive for COVID-19 at the team’s training base here last month after they arrived for the national camp.

In fact, Mandeep was the first player to be admitted in the hospital here. Since then all the six players have recovered and started their individual training sessions.

“I think we had read and heard so much about the pandemic being a deadly disease, the first few days were stressful and anxious after testing positive for the virus.

“Although I have been in some of the most difficult match-situations as a professional hockey player, I had never felt this stressed,” Mandeep said in a Hockey India release.

“I was never taken away in an ambulance, never been seriously injured either. So, this phase was a new experience for me. After recovering, they (Hockey India) even gave us an option to return home to take a break if we felt like it but we wanted to stay back and rejoin the rest of the group,” said the forward, who scored maximum goals for India in 2019 season.

The 25-year-old hailed the team management for their help and support during their recovery phase from the deadly virus.

“We have a very good trainer in Robin Arkel and he knows exactly how much to push us. We are taking only 50-60 per cent of the regular work load at the moment and have just one session per day,” Mandeep said.

“Chief coach Graham Reid is also constantly monitoring how we feel during a session. It feels good to be back with the rest of the group and I feel relieved to be fine and recovered fully.”

With FIH Hockey Pro League restarting from Tuesday, Mandeep said it’s feels great to witness the resumption of sporting activities around the world.