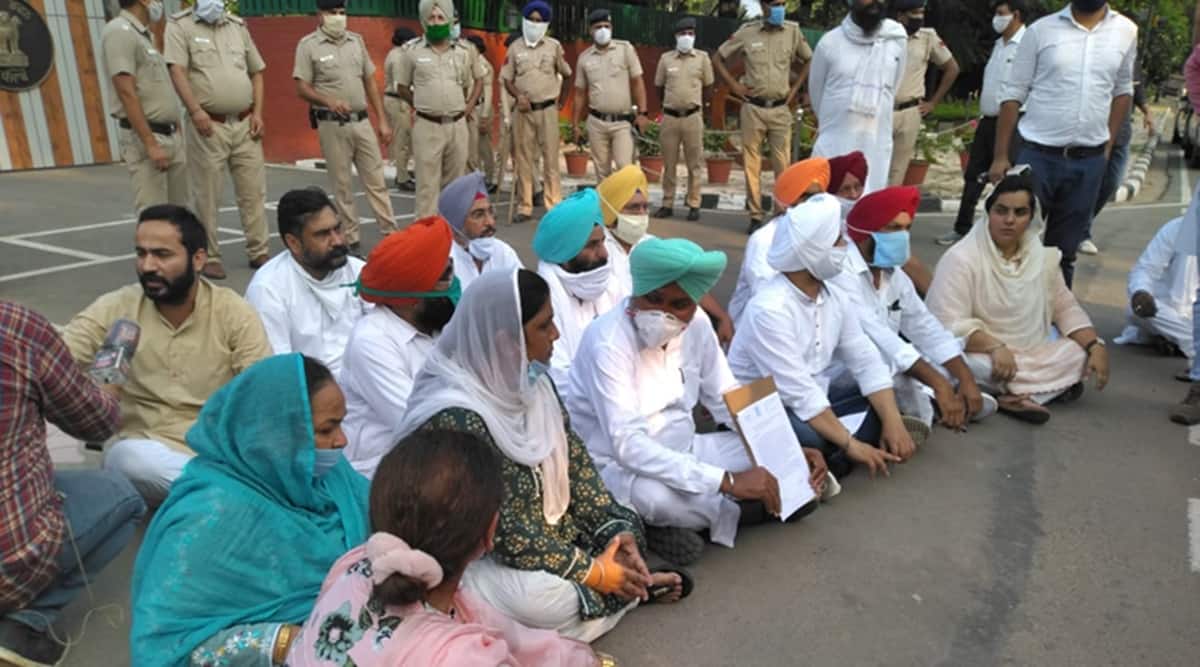 After the AAP delegation sat on a dharna in front of the Raj Bhavan, the Governor V P Singh Badnore defused the situation by stepping outside and receiving the memorandum. (Twitter/HarchandSBarsat)

The Aam Aadmi Party (AAP) has announced its full support to the farmers’ strike on September 25 against agriculture Bills passed in Parliament and has directed all its leaders and volunteers to for human chains across Punjab on September 24.

Amidst high drama outside Punjab Raj Bhavan, a delegation of MLAs and party leaders led by Leader of Opposition Harpal Singh Cheema and Punjab in-charge Jarnail Singh (MLA) handed over a memorandum to the President through the Governor alleging that the delegation was not allowed inside.

Speaking to The Indian Express, Cheema said the Raj Bhawan officials were using delaying tactics to prevent the delegation from meeting the Governor.

“First, Raj Bhavan did not allow us to meet the Governor and later we were told only two people could come inside. We had gone with nine people only to maintain social distancing, but we agreed to take only two people inside. However, then the officials asked for Covid negative reports. On this, we protested and said if the Governor does not want to meet us then we will sit outside the Raj Bhawan on dharna,” Cheema said.

After the AAP delegation sat on a dharna in front of the Raj Bhavan, the Governor V P Singh Badnore defused the situation by stepping outside and receiving the memorandum. He also assured that he would forward AAP’s memorandum to the President immediately.

Cheema termed said the “coercion” used by the ruling BJP to pass the agricultural laws was a “blatant assassination of democracy”.

The LoP said that the policies of Prime Minister Narendra Modi would be disastrous for the people and democracy of the country. He demanded immediate resignation of BJP MP and Union Minister of State for Commerce and Industry Som Prakash from Hoshiarpur in favour of the farmers and warned to lay siege to the Union Minister’s house if he did not resign.

Jarnail Singh said that AAP had been directly and openly opposing these deadly ordinances from day one while accusing the entire Badal family including Harsimrat Kaur Badal and Chief Minister Amarinder Singh of pursuing a double and opportunistic policy. He said that AAP would protest against black laws on September 24 by forming human links in Punjab.

Baljinder Kaur said that despite the alleged announcement of MSP, cotton and maize crops were being procured in the mandis at half price. She said that if Modi government succeeds in enforcing this fatal law then wheat and paddy would be sold at huge losses by farmers like maize and cotton.