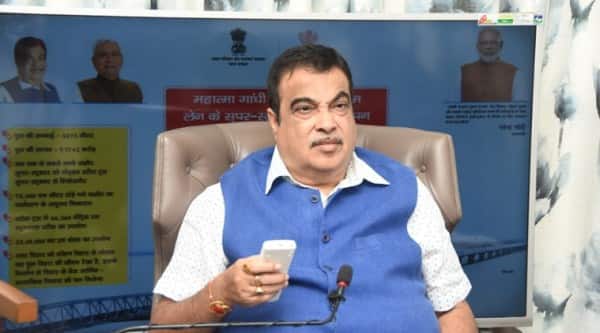 Terming the renovated Mahatma Gandhi Setu in Bihar as “an engineering marvel” and “lifeline” for the masses, Union road minister Nitin Gadkari on Friday said the government is laying a network of bridges and highways to beef up infrastructure in the state.

He also said that multiple steps are being taken to promote economic growth and create employment opportunities in Bihar.

Inaugurating two completed lanes of the 4-lane bridge being renovated at a cost of Rs 1,742 crore through video conference, the road transport and highways minister said that in addition bridge projects worth Rs 10,338 crore are on the anvil on the river Ganga which will change the economy of the state.

He said the renovated Gandhi Setu connecting Hajipur to Patna is one of its kind in the country and the superstructure consumed 66,000 tonnes of steel and will prove as a case study.

Under the project existing concrete structure has been replaced by new steel deck superstructure.

The designing of the bridge has been done by IIT Roorkee and international consultants were consulted for it, he said.

The remaining two lanes of the 5-km long Mahatma Gandhi Setu that connects north Bihar and south Bihar and sees about 1 lakh PCU (passenger car unit) traffic daily will be completed by December 2021, he said.

The bridge benefits Hajipur, Chhapra, Muzzafarpur, Samastipur, Darbhanga, Madhubani, Sitamarhi, Siwan and eastern Uttar Pradesh on the northern side and Patna, Ara, Arwal, Jahanabad, Nalanda, Gaya, Aurangabad and Jharkhand on the southern side, the Minister said.

He said a number of obstacles were being faced in renovation of the existing bridge but ultimately technological research paved way for its renovation.

In addition of the existing old Mahatma Gandhi Setu, a parallel new 5-km long and 4-lane bridge on Ganga will be constructed at a cost of Rs 2,926 crore, he said and added that the work on the project will begin in October and completed by March 2024.

“The new bridge will be the first bridge in the country which will have a span of 242 metres and vessels can pass below it,” he said.

Providing details of the upcoming bridges, the minister said construction will begin on Rs 1,478 crore bridge on Koshi river which will serve as a connectivity link between Bhagalpur and Madhepura besides improving connectivity to Nepal, West Bengal and North Eastern states.

The other bridges include Rs 1,100 crore Vikramshila bridge to connect Bhagalpur and Naugachia and Bhojpur-Buxar bridge on Ganga that will provide connectivity to Uttar Pradesh and will be completed before 2021.

The minister said work will start soon on the Sahebganj bridge where tender had to be cancelled due to Chinese participation.

In addition, for the development of Bihar, Madhubani paintings were being promoted while state products like litchi will be exported.

Emphasis is also on creating a huge network of waterways to bring down logistics cost which is exceptionally high in India at 17-18 per cent as compared to 7-8 per cent in countries like China.

“The Rs 10,338 crore bridges on Ganga will change the economy of Bihar. The government is committed to address issues of poverty unemployment etc,” he said and added that the turnover of village industries which was Rs 88,000 crore is being planned to be taken to Rs 5 lakh crore in two years.

Union Law & Communications and IT Minister Ravi Shankar Prasad stressed the need for a bridge in Kala Diara in Bakhtiyarpur across Ganga.

On the occasion, Union Food and Consumer Affairs Minister Ram Vilas Paswan lauded Gadkari for transforming the face of highways in the country.

Minister of State for Road Transport and Highways VK Singh said Rs 30,000 crore worth of work was being implemented in Bihar. He said Rs 3,800 crore was transferred to farmers’ accounts in lieu of land acquisition.